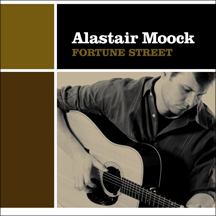 The Boston Globe
“On a new album, Fortune Street, Moock sings about urban isolation, a land of plenty rotting on the vine, and love’s many moods with insight, defiant idealism, and a survivor’s hard humor. If Woody Guthrie grew up in 21st-century Boston, he’d sound a lot like Moock.”

Sing Out!
“With each of his five albums, this Boston-based singer-songwriter has honed his signature ability to write songs that sound joyfully homespun and irreverent while also being painstakingly poetic and intricate… There are no simple songs on Fortune Street; each grapples with hard times, deep feelings, or dramatic moments in history.”

Rock ‘n Reel (UK)
“If you yearn for the Americana of The Band and The Grateful Dead or believe that Time Out Of Mind is Dylan’s finest album then run, do not walk to Fortune Street, the fifth album by Boston’s Alastair Moock. ” (Five Stars)

John Weingart, Music You Can’t Hear On The Radio
“Like Bill Morrissey and Chuck Brodsky, Alastair Moock stands out from the pack of singer-songwriters with a wonderful writing and singing voice that is rooted deeply in folk traditions but still uniquely his own… I particularly love “Woody’s Lament” and “Cloudsplitter” both of which add information, understanding and fresh perspective to subjects I would have thought were exhausted.”