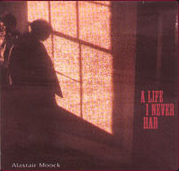 The Boston Globe
“A Life I Never Had is the CD that fans of rootsy local songwriter Alastair Moock knew he had in him. He displays the gifts the best folk songwriters have: romantic without seeming mawkish, clever without seeming precious, brooding without seeming self-pitying. The new CD is an aural feast, richly melodic, set to a propulsive groove, brimming with eloquent riffs and evocative moments, including stunning reinventions of classics by Woody Guthrie, Jimmie Rodgers, and John Prine.”

Performing Songwriter
“Alastair Moock’s all-American folk music plays out if he were the second coming of Tom Waits. His latest, A Life I Never Had, is a seamless blend of blues and poetry.” [Top 12 DIY, December 2002]

Sing Out! Magazine
“Boston singer/songwriter Alastair Moock consciously draws his inspiration from a variety of American roots traditions. On A Life I Never Had, the raspy-voiced personable-sounding Moock offers another collection of original and cover songs that bridge the gap between contemporary and traditional music… A particularly impressive new collection of songs…”

The Boston Phoenix
“Alastair Moock has built his reputation in the Boston folk scene on a few simple elements: a gruff but tuneful voice, muscular steel-string fingerpicking, and raw, earthy songs. On A Life I Never Had, he brings one quality that was deliberately absent from his first two studio albums — high-quality studio production — to the table with excellent results. Because, if his previous work showcased Moock’s natural gifts as a songwriter, A Life I Never Had gives his work the sonic sophistication it deserves.”

George Carlin, Comedian
“That CD is a killer — just a total complete motherfucka. I can’t listen to it without crying.”